You probably remember how Electronic Arts tried to talk themselves out of the Star Wars Battlefront II disaster back in ’17 by claiming the game’s lootbox-centric design was actually beneficial to its players. Yeah, that went down as well as expected.

However, greedy nonsense like that aside, video games obviously can make players feel proud of themselves for accomplishing certain goals or overcoming hard challenges. During the past few months I was reminded of how that actually feels like.

Arknights is, at its heart, a tower defense game. It’s a gacha game too, with everything that that entails, good and bad (which is a topic for a post of its own though, I’ll get to that soon™).

I actually didn’t anticipate to like it as much as I do because the few tower defense games I’ve played over the years got boring pretty fast – and they all weren’t very engaging to begin with.

This is a completely different beast however. First of all, the game has tons and tons of story and lore. You get to actually know the world and the characters, which gives the gameplay quite a different feel from just placing some generic units in whatever stages.

The gameplay itself is where Arknights really shines though. Holy crap, has this a lot of complexity and depth to it! Most of the time you can freely choose up to twelve of your characters (called operators) to make up the squad for the mission at hand, and there’s quite a selection. After only a couple of weeks I already had about 80 units to choose from, and right now, after three months, I’m at 107. Why do we need so many? Because there’s a plethora of different roles to fill and tasks to perform.

Here’s a look at the eight main archetypes: 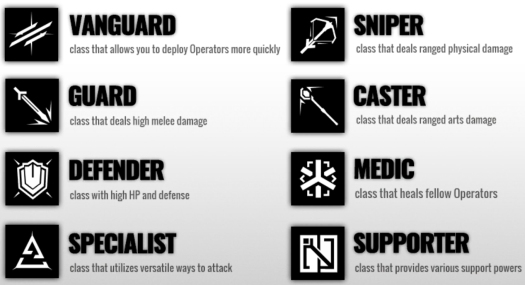 Well, yeah, but that’s just the tip of the iceberg, as you’ll find lots of differences and specializations even within the same archetype. Take Guards for example, the game’s melee DPS units: there are Dualist Guards, which can only block and attack one enemy unit at a time, but usually deal a lot of damage and are quite sturdy; by contrast, AoE Guards can block two or even three units and attack just as many; then there’s Ranged Guards, which can attack from a distance and also deal damage to airborne units; Arts Guards deal magic instead of physical damage; and quite a few more.

It gets really crazy when you look at the Supporters and Specialists. There are operators that can pull enemies towards them, others push the baddies away. Some can slow or stun, others buff their allies or debuff opponents. Summoners are also a thing…the list goes on. In other words, the possibilities are nearly endless. 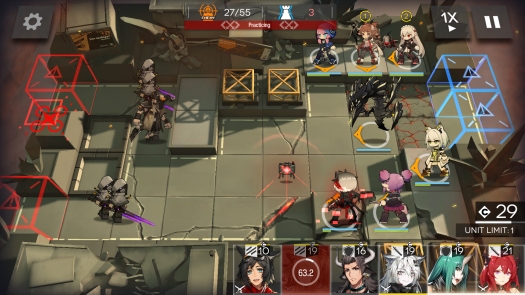 It’s no surprise, then, that choosing the best operators for a stage and utilizing them to their strenghts is the key to victory. Which isn’t to say that there’s only one “correct” way to do it. Quite the contrary, in fact. As the developers don’t know which operators each player does or doesn’t own they obviously can’t design any stage to only be winnable with a certain combination of units, therefore it’s always up to each player to figure out a way that suits their roster and playstyle.

And boy, this is so much fun! Actually it’s even more than that. I can’t describe how satisfying it is to beat a tricky stage by going in with my allround-squad first, failing, and then gradually figuring out the solution by substituting operators, placing them elsewhere or in a different order, until I finally get it right and am like “Well, that wasn’t so hard, was it?”.

Wait, you know what? I actually can describe that feeling: it’s one of pride and accomplishment, that’s what it is. Turns out that succeeding at well designed, challenging and fun gameplay can satisfy in a way that grinding mindlessly or swiping your credit card never could. Who knew? 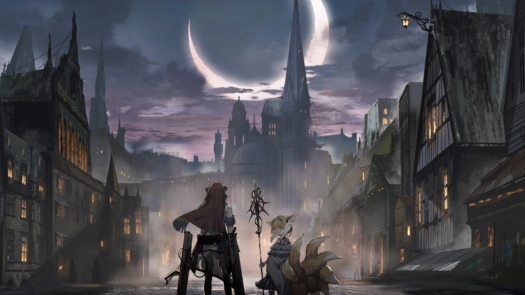 It’s been quite a while since a game gave me this kind of experience, and frankly, right now I’m quite addicted to it. And I’m not even very good at playing strategy games. When I started out in Arknights I kind of assumed that it wouldn’t take long for me to quit out of frustration or impatience.

It’s so bloody motivating though, and fortunately there are various means of support when I can’t for the life of me figure a stage out. Due to the game’s RPG mechanics I can always try and level up my operators some more to brute-force it. If that also fails – which it usually does if the chosen approach is just bollocks – there are some very good content creators on YouTube providing walkthrough videos that usually help me “get it”, enabling me to beat the stage even if I don’t own all of the operators that were used in the guide.

So yeah, I’m having a blast, and I haven’t even talked about the game’s great soundtrack, its nifty base-building system (including a little bit of actual housing!) or how generous and rewarding everything feels.

To my knowledge there isn’t a native PC version, so should you want to give it a try you’ll have to either play it on mobile, or install it via an Android emulator like BlueStacks, which is what I use.

Now, I do realize the irony of taking EA’s stupid claim I talked about in the beginning and applying it unironically to a gacha game. But, believe it or not, in my opinion gacha games – at least the ones I know – are actually a lot less unethical than what many western publishers try to get away with these days. I’d prefer Arknights’ or Genshin Impact’s monetization schemes over FIFA Ultimate Team, SW BFII’s “progression” or legacy ArcheAge’s P2W cash shop any day.

That, however, is a discussion for another day.