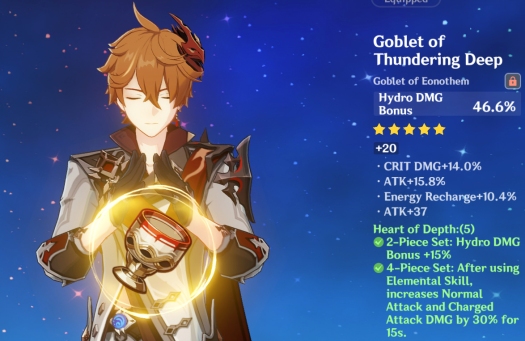 The other day I was fiddling around with my characters’ artifacts in Genshin Impact, pondering which ones to keep or ditch, which to upgrade further or leave as is and so forth.

Getting really good artifacts like the one seen above is quite hard as there’s a lot of RNG involved.

Firstly, the main- and sub-stats they drop with are – with a few exceptions – completely random. You can (and regularly do) even get pieces of such a set, this one is obviously meant for Hydro characters for example, with a bonus to, say, Pyro damage as its main stat. While such an item isn’t necessarily useless it certainly isn’t what you’re hoping for when farming a particular set.

Secondly, each time you raise an artifact’s level by 4 it gets an additional (random) sub-stat unless it already had four. In the latter case one of the existing sub-stats is chosen, you guessed it, randomly to get a boost.

It isn’t all bad though. With perseverance and a bit of luck it’s absolutely possible to get very strong artifacts, as you can see here.

The main reason for this, I believe, is that there aren’t actually that many different stats for the RNG to choose from. Therefore you’re gonna hit the desired combination eventually.

Anyway, all this made me think about the different kinds of stats I’ve encountered over the decades in various RPGs, MMO or otherwise, which finally brings us to the point I’m trying to make today: depending on class, playstyle et cetera there are always desirable stats and undesirable stats…

…and then there’s Accuracy.

I’m really glad that Accuracy doesn’t exist in Genshin Impact because, as far as I’m concerned, it is the most annoying, unnecessary and, above all, unfun stat of them all.

The way I see it Accuracy, sometimes called Hit Rating or somesuch instead, is a remnant of Pen & Paper RPGs that should never have made its way into RPGs played on digital devices in real time.

“But Mail, when characters in Dungeons & Dragons have a THAC0 it makes sense that characters in computer- or console-RPGs have it too, right?”

Well, no. Let me explain why.

When you play Pen & Paper a dice roll is usually the only way to determine whether or not your character succeeds at whatever it is you want them to do (unless the GM hates you or something). If you didn’t need to win those rolls your alter ego would be pretty much infallible because in order to make them do something you but need to say it.

Go ahead, try to do that in a real time video game. I’ll wait.

Didn’t work out so well, did it? That’s the thing. ‘Telling’ your character what to do is so much more complex and, at times, difficult in Action RPGs, MMORPGs and other games of their ilk nowadays that this already is the challenge. Adding an arbitrary dice roll to decide whether you succeed or not is not only unnecessary, it’s downright mean.

So you’ve positioned your character correctly, selected the right target and pushed your myriad of buttons in the optimal order and all at the right time? Well done to you, mate, but unfortunately the dice roll says that you failed to interrupt the boss’s one-shot mechanic, and now you’re dead. 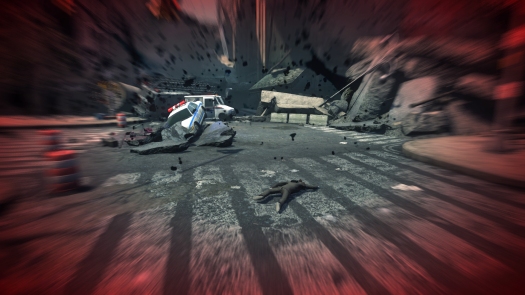 In order to minimize those frustrations you can try to maximize your Accuracy-stat of course. I see two problems with that though.

One, more than a few games that have a Chance To Hit mechanic also have a hard cap for it, so you’ll still fail a roll every so often no matter how much of the stat you stack on your gear, which makes it even more unfun.

Two, and this is what bugs me the most, it’s a must-have stat that does basically nothing for you. In The Secret World and SWTOR I stacked as much Accuracy on my tank gear as theorycrafters had figured out was necessary to practically (in SWTOR’s case literally) have a 100% chance to hit in any situation, just to be sure I’d never miss an important impair or taunt, respectively.

So what I did was, in essence, to waste a whole lot of my available stat pool to make sure I’d never realize it’s even there.

But isn’t raising our characters’ stats supposed to be one of the really fun things about playing RPGs? Hitting harder, running faster, jumping higher, all that jazz…that’s fun! Notice how “Missing less often” isn’t on that list, and it feels even worse when I’m basically forced to pour stats into this instead of those other things that are actually enjoyable.

And, again, having another way to fail in video games where the difference between victory and defeat hinges as much on my skill as a player as it does on my character’s stats anyway is just not necessary. I can easily manage to screw up on my own, thank you very much.

So, yeah, I know where the Accuracy stat is coming from and why it makes sense in its original context. But can we please get rid of it in MMO- and Action-RPGs? Like, for good?

5 Replies to “Accuracy is a bad stat in MMORPGs”