Last week I made the case that it’s absolutely possible to include open PvP in an MMORPG without it necessarily becoming a paradise for the wolves and a nightmare for the sheep.

Today I’d like to follow up with the reason to include it in the first place. Why should a game allow players to attack one another without both parties’ consent when it just could, you know, not allow it instead?

When I look back upon 35 years of playing video games my personal answer to that is quite clear: the most elaborate quest, the trickiest of puzzles, the most complicated boss-mechanic – none of this could ever be as unpredictable, exciting and memorable as interactions between human beings in an open, unscripted environment.

Note that I said interactions, not combat. In fact some of the memories I’ll share with you today don’t involve players killing each other at all, or at the very least not out of malice. Let’s face it though, at their heart most MMORPGs are mainly about combat. Even with those that have great housing, gathering, crafting, all that kind of stuff, I’d wager that the majority of players spend at least 80% of their time fighting something or someone (travel time excluded). It’s no surprise, then, that in order to let players interact in non-cooperative ways combat comes to mind rather naturally.

Anyway, here they come, my fond memories of MMORP-gaming moments made possible by open PvP rulesets.

Not only was Ultima Online my first MMORPG, it was also the first (and last) time I joined a roleplay-focused guild. We were the Guard of Yew, tasked with protecting the eponymous little town. The first RP-event I was part of was centered around a guy who’d done something bad and thus had to be hunted. Somehow I was the one who found and caught up to him. So what did I do to make sure he didn’t escape? Well, I gave him a good walloping with my mace of course. He didn’t wear any armor though and dropped dead from the second hit.

It was then explained to me that I wasn’t supposed to do that. Instead I should have acted out the process of catching him with emotes. Oopsie…

Fortunately nobody was mad at me, actually we all had quite a laugh about it. Someone even made a comment along the lines of that they now knew whom to call whenever real bad guys show up.

Another time I was standing around in one of the game’s cities when I got an on-screen message that someone had just stolen an item from me. When I looked back to my avatar I noticed a player running away from my position whom I hadn’t noticed before, so I figured it must be the dirty thief. I gave chase, intent to teach the guy some manners. Only that when I tried to hit him I found my character angrily shaking his fists instead – for it was my axe that he’d stolen!

Dumbfounded, I stopped running after him and just stood there for a moment, watching him sprint out of sight, probably off into the sunset with his shiny new axe. Then I started laughing and couldn’t stop for quite some time. The axe wasn’t overly valuable anyway, and I found imagining someone steal such a huge hunk of metal from me, right out of my hands no less, just hilarious. 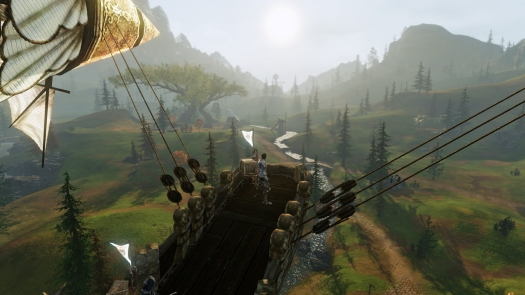 Many years later I was playing ArcheAge Unchained, minding my business in Two Crowns, our family’s eternally peaceful home region, when a Haranyan player crossed my path. He wasn’t running or trying to hide, he seemed to be strolling about without a care in the world. This was strange because only residents of the respective continent are safe in these regions. Enemies of the state, in our case Haranyans and pirates, can be attacked at any time (and only then fight back). Either he didn’t know that or he didn’t care. Anyway, I don’t have the habit of killing players of much lower level than myself, but I knew that if he kept prancing around in the open like that someone else would do so sooner rather than later.

I didn’t assume that he’d bothered to learn the Nuian language before coming here, so I couldn’t warn him verbally. Instead I fired one shot at him, which took about a third of his health, and then ran a bit back and forth to indicate that he should get a move on. He just stood there, obviously not quite knowing what to do. Then…he actually fired a couple of shots back at me!

Due to level- and gear-disparity I took next to no damage, but I somehow felt that he hadn’t gotten the message. I fired another two quick shots, taking his health down to almost nothing, and resumed to just stare at him. Then he spawned his mount and ran away full speed ahead.

I don’t know what became of him, but I hope he learned the lessons that a) when you visit the enemy continent you’ll want to be a bit more stealthy about it, and b) not every player will outright kill you when given the chance.

One time our daily Hiram-raid’s leader sneakily opened a portal to Hellswamp instead of our next quest-destination. Before anyone had even noticed I, along with half the raid, had already jumped through and was quite puzzled by our new surroundings. As it turned out some of our leader’s guildies had been transporting trade packs during war and were now under attack by a small group of Haranyans.

He asked us to follow him and help his mates, which we did. Some players were a bit miffed by being utilized like that (because clearly no one’s got time for their dailies taking five minutes longer than usual, amirite?), but it seemed to me that the majority was quite happy about the diversion.

I wish I could have seen the Haranyan player’s faces. There were about half a dozen of them, and only two or three defenders, when all of a sudden our raid of at least fourty came crashing over the wannabe tradepack-thieves like a tidal wave.

Once the last farm wagon was safe we finished our dailies, but I for one would gladly interrupt or outright cancel such mundane tasks for rescue missions like this one at any time.

Today’s final example is about having ‘bad guys’ get a taste of their own medicine.

Merl and I were farming mobs for their coinpurses in Western Hiram Mountains. We deliberately did so while the region was at war to get the bonus to loot drop chances. Fortunately I’m always trying to be aware of my surroundings in situations like these because I noticed two red players advance on us just in time to brace for the attack. Their intentions were very clear, so I just called “Reds, reds!!” on Teamspeak and immediately opened fire on the one who was already in range.

Everything happened so fast, I have no idea which classes they were playing and how high their gearscores were, but since they’d decided to attack us they’d obviously liked their chances. They were mistaken. We killed them both, with the two of us still standing. I feel no shame in admitting that it felt very good. They didn’t come back and try again either, so I guess we made our point.

To be fair though, I put the term ‘bad guys’ in quotations for a reason, because I don’t really feel that way. As far as I’m concerned players of the opposing factions are fair game when a region is at war. You even get honor for those kills, so it’s not only tolerated, but actually intended gameplay. Hence I don’t blame those two players for attacking us. That doesn’t mean that it wasn’t extremely satisfying to kill them though.

I could tell you about plenty more cool experiences I’ve had in games with open-PvP rulesets – some I’ve already talked about in the past, like this one in EVE for example – but I think these are enough to showcase the kind of exciting events I’m talking about when I say that allowing aggressive interactions between players adds value to the overall MMORPG-gameplay. For me at least.