It’s already November again, meaning that National Novel Writing Month, NaNoWriMo for short, is upon us. Like many MMO bloggers I really don’t have the time to write fifty thousand words within a single month though, so it’s fortunate that Chestnut of Gamer Girl Confessions is providing a great alternative again: International Picture Posting Month.

The idea is that a picture is worth a thousand words, as the saying goes, so our goal is to post 50 pictures of our own making until November 30th.

Like last year I’ll be mainly posting screenshots of the games I play, which is very convenient as I’d be doing that anyway. As always I’ll try not to just post a bunch of pics and leave it at that; at the very least I’ll provide a bit of context, at best an associated story (if there is one).

Unsurprisingly I’ll start off with a bunch of ArcheAge Unchained shots.

If this looks somewhat familiar it’s because I’ve posted a very similar shot before. The two were taken more than five years apart though.

Lakisa and I knew from the beginning that once land ownership was unlocked in Unchained we’d aim for getting our old spot in Two Crowns back. Mainly for nostalgic reasons, but it’s actually a pretty good location gameplay-wise as well.

Marianople, Cinderstone Moor, Halcyona and Sanddeep are all within riding distance, which means that we can get to most places one visits regularly at higher levels without wasting teleports. Moreover, the continent’s northern regions are but a short boat trip away, so basically we can get pretty much anywhere relatively quickly.

Two Crowns is also one of three regions on our continent where trade packs can be turned in, so after finishing such a venture we’re right back at home.

Last but not least it’s a good starting point for a boat trip across the ocean towards Haranya, our enemy faction’s homeland. Even the vendor who sells intercontinental trade packs, which need to be delivered to his Haranyan counterpart in Solis Headlands, is right here.

Like I said in an earlier post we didn’t get our old property as a whole right away, which is a plot 16×32 meters in size, enough for a small house and a medium farm alongside it. We managed to occupy most of it with our two 8×8 farms though, and I had a feeling that our ‘neighbor’, who’d placed his 8×8 right next to mine, wouldn’t stay for long. We managed to upgrade Lakisa’s farm to a 16×16 shortly after, and I guess at that point it was pretty obvious that we wouldn’t be going anywhere.

Indeed, the other day while I was at work Lakisa called, mightily excited, to inform me that his farm was gone. Great, I said, just log me in, remove my farm as soon as no one’s around and place the house, no sweat. Which she did, so now we have the whole plot to ourselves, just like back in 2014. To say that we’re very happy about it would be an understatement.

We’d had all materials to finish the building prepared beforehand, so once I got home we started hammerin’. 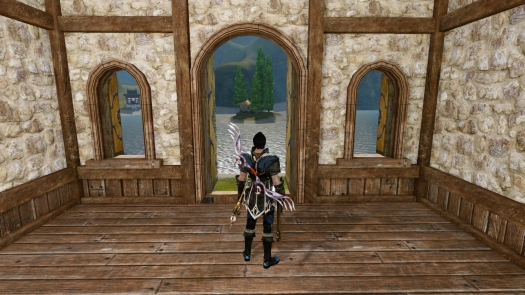 By now we’ve also been joined by Tristron, our buddy with whom we played and had some great adventures back then, so for us ArcheAge Unchained is clearly the return to good old times that WoW Classic has been for many folks out there.