Yeah, I couldn’t resist for long. Alongside Path of Exile’s new challenge league came quite a few changes to the passive tree, so as I had expected we all got a free reset. I seized that opportunity to change my Incursion-character’s build to a different kind of summoner centered around the unique helmet The Baron.

As you can see having as much strenght as possible is the name of the game. It gives you more zombies, boost your minions’ melee-damage, and if you manage to hit 1k strenght your zombies’ attacks leech life to you.

The summoner build I played until now was rather squishy and I died more often than I would have liked, so I definitely wanted that last bonus. It’s not easy to get that much of any one stat though. Fortunately the game provides a bunch of different means to get there.

Wearing items with strenght on them is obviously the most straightforward way.

Rare items are utilized to provide much needed life and resists, since those are in scant supply on most unique items. The uniques give significant bonuses to strenght, but also supplement the build nicely with an additional skeleton, life regeneration as well as a lot of dexterity and intelligence.

The latter is important because in order to level up all skill and support gems used in the build the other two stats can’t be neglected. Especially intelligence needs some love considering that a couple of the passive tree jewels also used to reach 1k strenght do this at its expense:

I’m just over 1k now with enough int and dex to make everything work. The life leech from the zombies is very noticable and makes surviving much easier, as does the fact that I’m wearing actual armor instead of energy shield items this time around.

Offensively the build absolutely rocks. I have 13 zombies and a maximum of 12 skeletons. Since I summon three skellies with each cast I’m at the maximum pretty quickly, and their damage output is tremendous. The zombies are socketed into The Baron, the skeletons into a five-link chest, so there’s still room for improvement. The fact that I leveled from 87 1/2 to 89 in just two days is a testament to the clearspeed the build already has in it’s current state.

Also helping with that are the spectres that I use. Monkeypower!

They don’t do much damage by themselves, but that’s not their purpose anyway. One uses a warcry that gives frenzy charges to surrounding allies, making them run and attack faster as well as do more damage, the other’s warcry gives power charges which increase crit chance. When supported with a Blood Magic gem, which makes a skill cost life instead of mana, they spam their warcries constantly as long as there are enemies in range.

The build is so much fun to play! It still has all aspects that I find great about summoners, namely that I don’t need to kill the monsters all by myself, yet I still have my hands full with directing and supporting my minions. Sure, in lower level areas I can casually stroll about and watch everything around me die, but on high level maps I have to be on the ball and can still die myself if I’m not careful.

What the build doesn’t have is the clunkiness and rather slow ramp up that my previous iterations of summoners had. I’m really happy with it.

Here’s her passive tree at level 89 with all points spent: 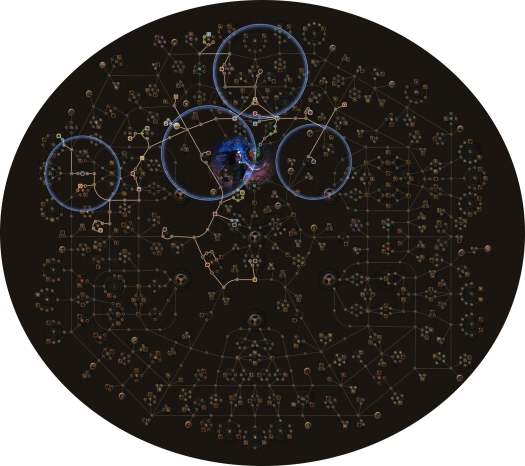